These fins are made for... 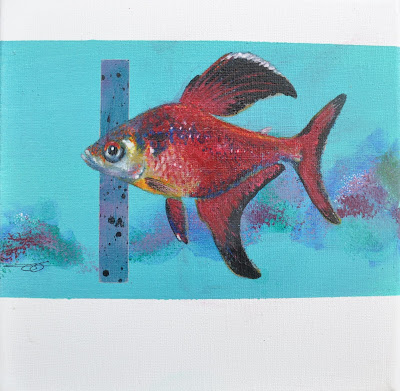 Fish swim. However... You would be surprised if you knew how many species of fish are known because of their flying skills. In most cases, leaving the water is an act of fear. A way to escape predators. The most well known flying fish have elongated fins, which give them the opportunity to glide through the air. The freshwater hatchet fish for instance, Carnegiella species, are well known aquarium fish which also use the air to escape predators. Their body is shaped like a hatchet (Ah! Now you know how they got their vernacular name!) The body is used to glide along the water surface after landing. Real surf dudes these guys!

The fish I have painted today do not fly, glide or surf. But they do have long elongated fins. The Robertsi Tetra has been known by hobbyists for many years (since 1956 to be precise) before it finally got its scientific name in 2014: Hyphessobrycon jackrobertsi. A truly beautiful fish, especially when the males are showing off. Because that's what they use their fins for: dress to impress. 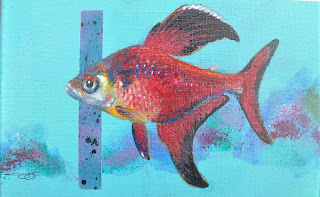 I just love all those colorful tiny tetras. Most of them are doing fine in small groups and easily adapt to the aquarium. In most cases even breeding them is rather easy. I have studied the species of Megalamphodus in 1988; in those days recognised as a valid family name. For the moment Megalamphodus is replaced to Hyphessobrycon. A characid family which includes more than 100 species; its status is still not definitely clarified. A friend of mine, Peter Boeters, a well known fish breeder in those days who passed away too young, had found a few mysterious fish in an aquarium shop. He could not determine the name and asked me to help him out. It took me quite a while, researching ichthyological literature, before I found their name: Megalamphodus eques. That is; I believed I was right at the time. As said the status of the rosy tetras is far from clear; today I am not so sure about my determination any more.

Eventually my search for the unknown tetra led to my first article published in an official (Dutch) aquarium magazine. I have made a scan of the article (sorry, its all in Dutch) including two of my first drawings and photos of the presumed M. eques: 'Megalamphodus en nog wat' ('Megalamphodus and something else').