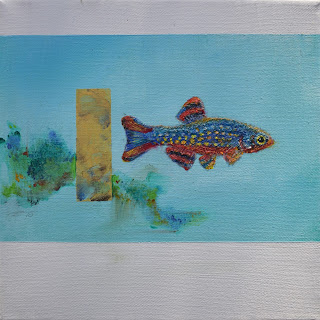 Science Fiction stories and, as we speak, Fantasy stories too, often include bizarre creatures which readers believe to have derived from the author's mind; whereas many of these exotic animals in fact are based on species that once lived, or are still living, on good old planet Earth. The world of wildlife is beyond imagination and provides an incredible variety of lifeforms useable to any writer. Yep, an endless goldmine of inspiration.

Besides the living creatures themselves; their names also provide inspiration. The huge number of species is organized and described by scientists.  And oh, what fun they have! Describing new species scientists come up with fantastic names. I have kindly used one of these names, Celestichthys, as the name of a space vessel in a short SF story I recently finished (´Innerverse´). Celestichthys, meaning ´heavenly fish´, is a name especially composed for a gorgeous little fish, described as Celestichthys margaritatus, which has become very popular in the aquarium trade as Celestial Pearl Danio, CPD in short, and is also known as Galaxy Rasbora, Fireworks Rasbora and several more vernacular and even pseudo scientific names. Described in 2007, this species profited from the hype in aquaristics: Nano Cubes. Small aquariums designed for small fish and invertebrates. The impressive name of Celestichthys didn't stand for a long time. In 2008 Conway replaced the tiny, hardly 2.5 cm long fish with its dark blue body, covered with multiple yellow-white spots, into the genus Danio.

Alas, rumor had it, the small beauties were imported in such large numbers they had become extinct in their natural habitat, isolated small, heavily vegetated pools at the foot of a mountain near Hopong town 30km south of Taunggyi in Myanmar. And, alas again, nothing travels the internet as fast as rumors. Luckily this cyberspace confusion soon appeared to be untrue. Facts and figures were based on supposed data; fantasies if you like. Fiction lost this battle from reality: instead of living in a restricted area the Galaxy Rasbora is now known to occur in waters associated with the Salween (or Thanlwin) River throughout Shan (Myanamar) and even across the border in northern Thailand.

Why did I use this name in a SF story? I have known the Galaxy Rasbora almost from the moment it was introduced in the aquariumhobby. I had the pleasure of keeping and breeding them for several years, being one of the first breeders in Europe. Despite their small size they are fun to keep. Even in community tanks, provided the aquarium is not overpopulated, juveniles will soon pop up. As I was writing this SF story, I was in need of a name for a space cruiser. Celestichthys came to my mind; after finishing the story I was even more convinced I had chosen wisely. Even considered it to be the title of the story for a while, but... eh; once you have read my twisted tale you will understand why I have chosen differently. 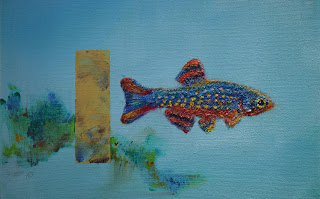