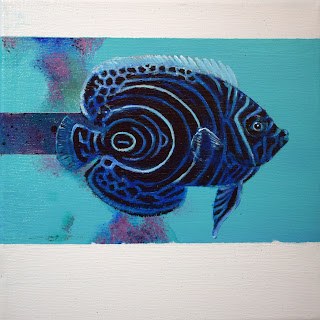 Juvenile fish often are not exact look-a-likes of their parents. Instead they show completely different coloration and behavior. Why? Mostly because it can be beneficial for the kids not to look like their parents. Many fish consider any fish with pigmentation; a color pattern and a body shape similar to their own as competitive.  So, being young, lean and mean juveniles often opt for an outfit which does not resemble the wardrobe of the adults of their species. Looking nothing like your parents increases the chance adults will tolerate your presence (and maybe even your behavior) in their territory.

Adult Emperor Angelfish (Pomacanthus imperator) show yellow and blue stripes on their sides; white, black and yellow coloration around the head; a mask across the eyes and a bright yellow caudal fin. Does the image of the young specimen I painted look like the adults at all? Nope; juvenile Emperors have a dark blue almost black base color with light blue and white lines which form vertical stripes and concentric circles on their flanks. The development of the pigmentation (and stripe) pattern in juvenile Angelfish has been studied (e.g. Painter, Maini & Othmer, 1999); proving the consistency of the formation of the stripings, starting with two vertical lines and developing into a more or less psychedelic pattern (as in the young Emperor I copied in paint). The 'special outfit' in some juvenile Angelfish (i.e. Pomacanthus paru in  Sazima, Moura & Sazima, 1999) has been proven to be an advertisement for their specialization: 'cleaning' fish. So, beside enabling them to live close to their parents; the juvenile coloration also is a significant signal to warn other fish:"Hey there! I can clean you!". A great way to obtain a free meal. And, last but not least, an additional warning to predators: "Hey there, I will clean you, don't eat me!"
Have you ever? Psycho kids that do clean their room!