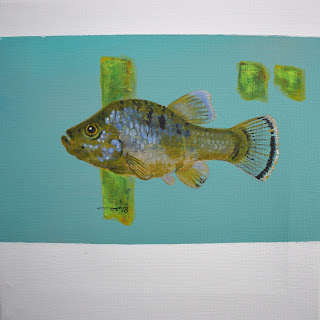 ´Last man standing´ was the first thriller I have read from David Baldacci, way back in 2001 or 2002. Does it matter? Not really as the title above this blog refers to something else and maybe, just maybe, I should have used the title 'Last fish swimming'. However. 'Last man' is the expression (although 'last fish' does sound far more dramatic and would be appropriate for the occasion). The fish pictured above is Cyprinodon inmemoriam. A male specimen; first caught specimen of its kind and... last specimen of its kind. How's that?

The four Cyprinodons are considered to be a monophyletic lineage; an assemblage of species with characters shared with C. alvarezi. All four species share the remarkable coloration of the eye, which includes two rings (a gold inner circle and a pale yellow outer circle). The only specimen of C. inmemoriam was a male specimen (57.3mm). Whereas the males of all four species have metallic blue colors on their body, this male showed pale grey blue coloration with obsolete bars. Colors in Cyprinodon males differ during the season. As no females of C. inmemoriam were found, the male specimen probably did not show its best colors. Why dress up if there's noone to impress eh? 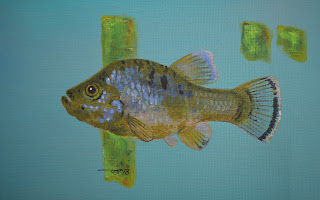 During the study by Lozano-Vilano and Contreras-Balderas two of the four springs dried up and the inhabitants (C. ceciliae and C. inmemoriam) presumably became extinct. In Ojo la Trinidad no fish have been found since 1985; the spring fully dried in 1986. That's how the one and only specimen of C. inmemoriam got his name ('inmemoriam' = remember after death). A unique endemic crayfish, Cambarellus sp., found at the same spring has not been described and also is considered extinct.

So; end of story? The chance of living specimens of C. inmemoriam  ever to be found again can be ruled out. We'll have to settle with the unique holotype (deposited at the Universidad Autónoma de Nuévo Leon; Mexico). The population of C. ceciliae is only known from Ojo de Agua La Presa; this spring nearly dried during the winter of 1991. Attempts to find specimens when the water returned in 1992 failed; since then this species is also considered to be extinct.
The other two endemic species, C. longidorsalis and C. veronicae, are considered to be endangered due to agricultural overexploitation of the groundwater. Thus, the story of this unique lineage of species does not have to end. However, the chances of survival are very limited.

Prints of the artwork in this blog can be ordered at my printshop in full and in detailed version (without the white borders).

Posted by Eduard Meinema at 6:00 AM