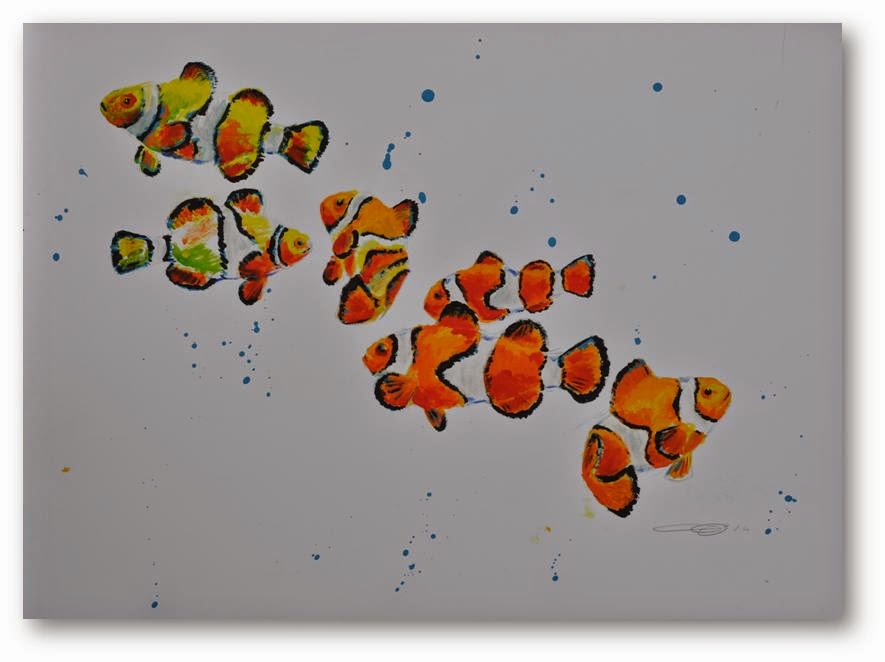 Oh come on! Did you really think I can't make a drawing of real clowns? Made this study for a painting which will have clownfish in several, non existing, colors. (No need to get really serious, do we...?)
Posted by Eduard Meinema at 12:05 AM No comments: 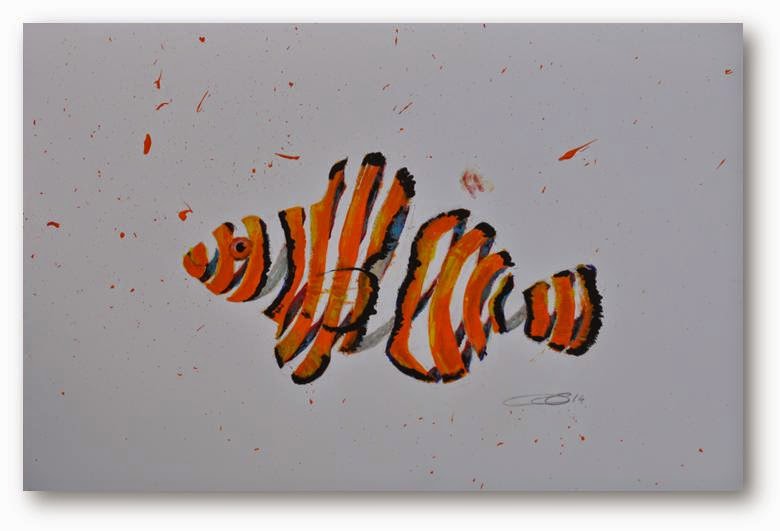 Ask anyone if they know a fish and they will answer you "Clowwnfish!". Or as a matter of fact: "Nemo!".
Nemo seems to be the official alter ego of clownfish nowadays. I must admit, the beautiful Amphiprion ocellaris, as it's officially named, still is one of my favorite marine fish. Kept them for many years and even have been able to breed them myself.

Clownfish are one of the marine fish which are commercially bred. More and more species are being bred in captivity, which is good. But the clownfish have become the 'guppies of the sea'. Breeders have taken advantage of the natural diversity of the funny clowns, so now the anemonefish are available in a large variety of colors. We've got snowflakes, misbars, goldflakes, platinums and even Picasso clownfish.

No doubt about the role of Picasso in art history, but he cannot compete with the inventivity of M.C. Escher. No breeder will be able to create a real life version of my image of an 'Escher Clownfish'...
Posted by Eduard Meinema at 12:05 AM No comments: 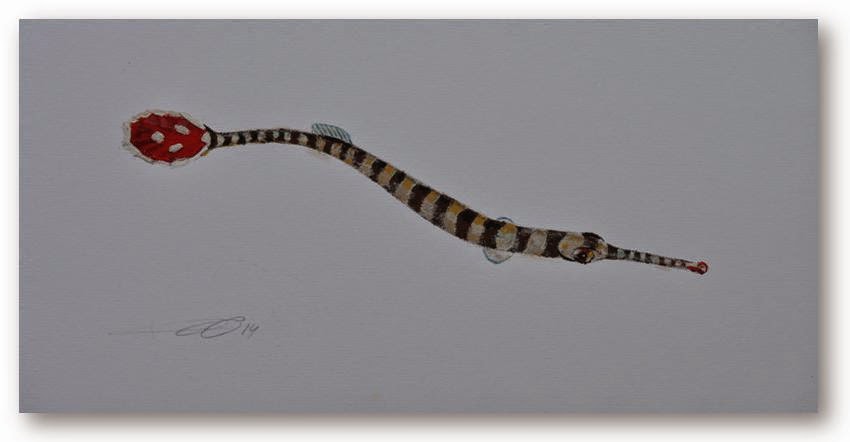 Those were the days... As a young boy I used to catch my own pipefish. Along the beach of Monster. Yep, believe it or not, there is a village called Monster! Located along the North Sea, only a few kilometres south of The Hague. The pipefish my brother and I caught, were simple, a bit drabby colored 'Small Pipefish' (Syngnathus rostellatus). They accidently ended up in the shrimpnet which we had fabricated ourselves. And after a nice bit of begging, we were allowed to take some of the 'pipes' back home. There we took care of them in a mini-aquarium we had placed in the backyard.

Nowadays several species of Pipefish are available for the tropical marine aquarium. Nicely colored and all having this awesome shape. The 'Banded Pipefish' is one of the most well known species. In nature, adult specimens are living in pairs, while the juveniles are living in groups. Its fancy, quiet behavior combined with its remarkable black and white bands and the flashing red caudalfin are making them real eyecatchers. Sometimes they are hanging above corals, hovering like a helicopter, only their eyes actively moving around. Most of the times they are actively hunting for small prey. Their elongated beak gives them access to the smallest holes between the coral. There they catch their prey. Maybe I should say 'suck' their prey, because, just like seahorses, they suck up their food. There's an interesting study about the development of this hunting procedure: Sam van Wassenbergh, Gert Roos & Lara Ferry: "An adaptive explanation for the horse-like shape of seahorses". - Nature Communications, Volume 2, no. 164. During evolution from pipefish to seahorse the hunting procedure has evolved and been perfected. 'Modern' seahorses can now hang around at their territory, just waiting for small prey to pass by and then...the little suckers are sucked. Pipefish are a little bit old fashioned. They still have to move around to catch their meal. So, no drive-in for them, but drive around...

Prints, mugs and other cool fish stuff based on my blog entries are available at my printshop.
Posted by Eduard Meinema at 12:05 AM No comments: