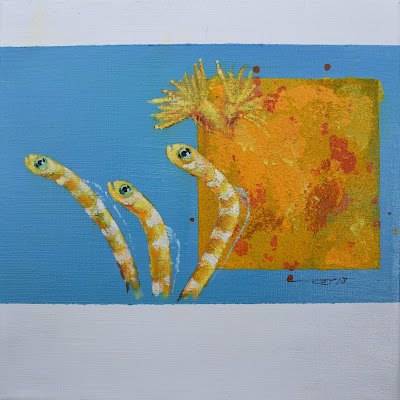 A secret garden is exciting; if you're able to find it of course. You will not find any Garden Eels in there though. These fish... yep, hard to understand, but these worm like creatures really are fish; so... these fish live in the sea. They are not that difficult to find, but rather uneasy to collect as they quickly disappear when approached. Where do they go? Into their tube like holes. Which may seem hard as some species can easily grow up to 60 cm length. But garden eels are masters in digging; they disappear, tail first, into their private space.

There are a few dozen species, each having their own color pattern. These patterns range from black blotches, or black and white zebra stripes,  to the 'Nemo-like' orange and white banded eels, known as Splendid Garden Eels (Gorgasia preclara). Last month a new species was described. Heteroconger fugax, based on a typical white blotch near its gill openings. Although its description is based on a single specimen, from Amami-oshima Island in Japan, photographic evidence proved the new species has a rather wide distribution area which includes Borneo and the Philippines. 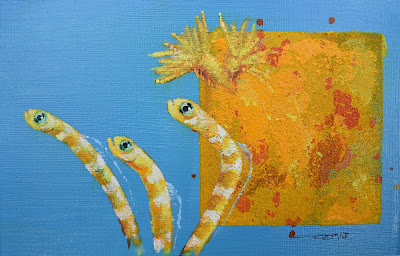 Imagine the ocean floor, empty and deserted. So it seems; but if you wait for a minute or two you will see the head of a fish popping up. Within seconds the ocean floor is filled with waving worms. Garden Eels, living closely together, feeding on small particles of food drifting by. One move and they're gone. Have a look at this magnificent group of garden eels at Bali, to get the feeling.

Prints of the artwork in this blog can be ordered at my printshop in full and in detailed version (without the white borders).
Posted by Eduard Meinema at 6:00 AM No comments: