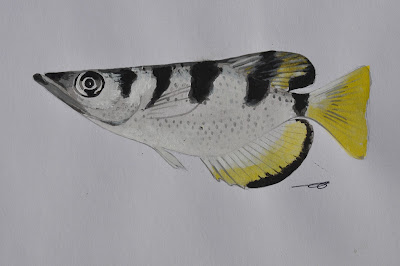 A public aquarium without a couple of Archerfish is like a Zoo without elephants and monkees. And I’ve got to admit, their interesting behavior makes these fish very appealing. At feeding time many people will gather at the aquarium with Archerfish to see how these magnificent fish are spitting insects from branches above the water. Once an insect is hit, it falls in the water and…bon appetit! Although it must be said that in many cases the archer itself is not the one who gets the reward. Other fish will profit from fallen insects just as easy. That’s life.

As early as 1767 the first Archerfish was described as Scieana jaculatrix. In 1816 the genus Toxotes was created. The situation around this first description has only recently been clarified by Kottelat (2013). He had found the description of Cuvier, published in November 1816 and always accepted to be the first author, to be following an earlier description, mentioned in a supplement only, by Cloquet in October 1816. Credit where credit is due, even though it took 200 years. 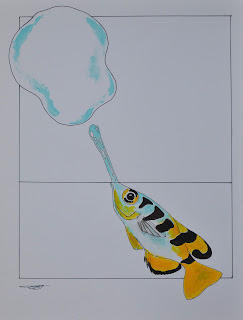 A family known for such a long time usually includes a few peculiar misidentifications. So does Toxotes. A specimen described as Toxotes squamosus, by Hutton in 1875, was synonimised by Mead (1972) with Brama brama, a completely different type of fish (also known as Pomfrets). 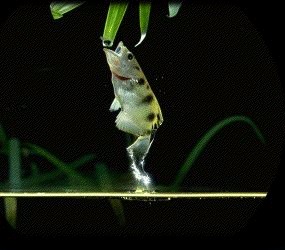 It should be said, that even though Archerfish are excellent shooters, they are also very good jumpers. As shown on the photo, they are capable of picking insects from leaves above the water.


Reprints and cards from the images above, but also  the mugs pictured underneath (as well as T-shirts, cards and more merchandise) are available at my printshop. Mugs and merchandise are available with the text 'Spit on it!'; 'Spit it out!' and 'Spitting image'. 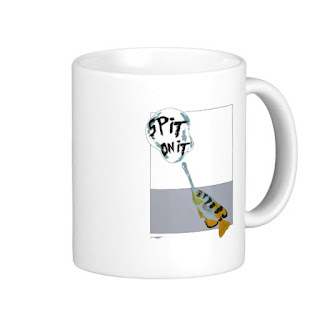 Posted by Eduard Meinema at 7:30 AM No comments: