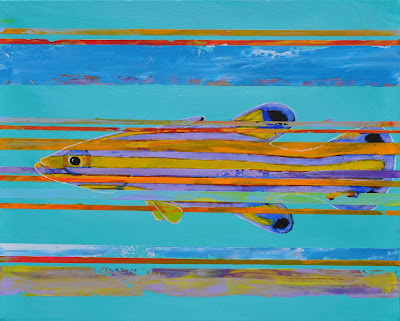 Last weeks blog was about a Butterflyfish, member of the Chaetodontidae. Larvae of Chaetodon, like most marine fish, completely differ from the adult specimens. I'm presently working on larvae of the Cyprinodontidae, a family of freshwater fishes. Studying the available literature I found this article of Carole Baldwin. It includes magnificent pictures of marine fish larvae. Fish larvae are amazing, sometimes incredible and bizarre, creatures which differ so much from their ancestors, many of them have been described as new species in the past.


Knowledge of the larval stages, also known as Early Life History, is not only fascinating. It's also important to understand the relationships and variety of fish. Whereas most scientists use preserved specimens, I prefer to study live material. As fish larvae are rather small, most of them only a few mm long, it is rather difficult to make good pictures. I use combinations of photos to create line drawings. Some of the pictures in Baldwins article are truly amazing and outstanding. And surprising. Who would have guessed the photo in this blog is a larva of the fish in the painting I made? Liopropoma rubre, also known as the Peppermint Bass, is a territorial fish, found at greater depths in the Western Atlantic (from southern Florida and the Bahamas to northern South America).

Take a look at the great pictures in: Carole C. Baldwin (2013): "The phylogenetic significance of colour patterns in marine teleost larvae" - Zoological Journal of the Linnean Society, 168, 496–563. With 52 figures

Buy the painting in my ETSY-shop.
Posted by Eduard Meinema at 12:57 PM No comments: 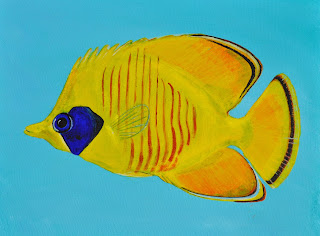 Butterflies inspire me. The ones flying around in the garden, but most of all the ones rolicking around the coral reef: butterflyfish. This Chaetodon semilarvatus, or Blue Masked Butterflyfish, is a great example Yellow beauties, usually seen in pairs or hiding under table corals. The remarkable blue eye patch hides the eye and confuses predators.
These butterfly fishes live around coral, at depths from 3 to 20 m. They are very common throughout the Red Sea. (IUCN status says: 'Least Concern' . Always nice to know there still are species which are not threathened!).


Butterfly fish or Chaetodontidae are small, colorful fishes with a continuous dorsal fin which gives them their special look. "Chaetodontidae" is based on Greek, meaning "bristle teeth". If you're crazy enough to check it out, you will find they indeed have small, brush-like teeth. Most species of butterfly fish are active during the day, resting among corals or rocks at night.
A number of species feeds on coral polyps. These species tend to be territorial. When a coral, or a part of the coral, is attacked by the fish, the surrounding polyps withdraw as far as they can into their protective skeletons. The butterfly fish then has to move further along the reef. Species congregating in large shoals are generally planctivores. Many species, like this Bue Masked Butterfly, are heterosexual pairs that may remain together for years, some even say for life.
Posted by Eduard Meinema at 12:02 PM No comments:

Crop circles found in fields have become a familiar sight. More recently mysterious, geomatric circles of sand have been discovered under water.

Notably the first crop circle was described in the 1678 news pamphlet "Strange News Out of Hartfordshire" (UK). The phenomenon became widely known in the late 1980s, after the media started to report about crop circles in the UK. Despite rumors about their alien origin, there is a scientific consensus that in nearly all cases crop circles are man-made. However there has been almost no serious scientific study of the phenomenon. In 1991, two hoaxers, Bower and Chorley, claimed authorship of many circles throughout the UK. To date, approximately 10,000 crop circles have been reported internationally.

The mysterious circles under water have been explained by biologists who filmed a small, then unidentified, puffer fish building a circle. The male Japanese puffer fish created a perfect geometric circle; a nest to lure females. The rather dull colored puffer is hard to see as his coloration resembles the sandy ground of the ocean floor. Perfect for camouflage, but hopeless when you are looking for a female. The circle certainly draws the attention of the opposite sex. The first scientific report on this behavior was published in Nature in 2013. The puffer itself has been described more recent by Keiichi Matsuura (see reference) and given the name, Torquigener albomaculosus, referring to the many white spots on its body (albus = white; and maculatus = spotted). The BBC has released a video of the circle builder:

Since the early 1990s, the UK arts collective named Circlemakers founded by artists Rod Dickinson and John Lundberg (lateron including artists Wil Russell and Rob Irving), have been creating crop circles in the UK and around the world both as part of their art practice and for commercial clients. Undoubtedly the puffer has been building his circled nest long before humans decided to create crop circles. Long before the first reported circles of 1678. The diptych pictured above is my impression of this remarkable fish and its behavior.

Posted by Eduard Meinema at 12:07 PM No comments: